Jumpstart your writing practice in just 10 minutes a day 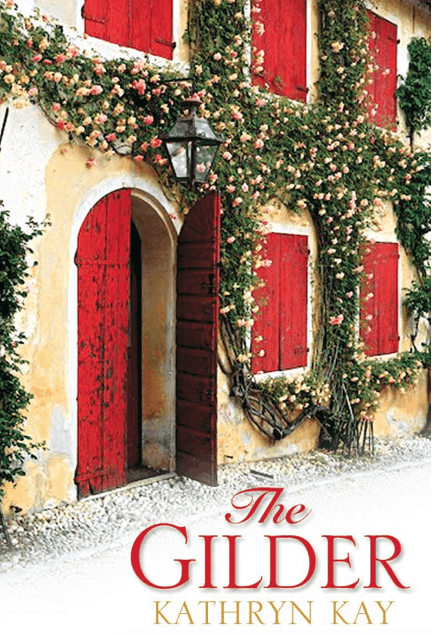 Marina Nesmith spends her days in the company of priceless artifacts, antique furniture, and ornate frames as she strives to hide damage and repairs under a flawless gilt surface. In a life that appears as gilded as her art, her quest for excellence extends to all things, including her life with her fifteen-year-old daughter, Zoe. When Zoe makes a heartbreaking discovery that brings the mystery surrounding her father's identity and untimely death to a head, Marina is forced to confront the shameful truth beneath the gleaming veneer of their life.

The Gilder on Amazon

PRAISE FOR THE GILDER

“Kathryn Kay’s The Gilder, beautifully set in the romantic city of Florence, reminds us that love, like great art, is always complex. Kay leads her talented artist and loving mother Marina through a courageous quest as labyrinthine as an ancient Italian street. With persistence and passion, Marina discovers that relationships can be repaired, making what is truly golden shine forth.”

“The Gilder engages the reader from the very first line. Amid sensuous details of life and art in Florence, Kathryn Kay tells a compelling story of seduction and betrayal which ultimately transforms into a story of love and redemption.”

“In my book on the writing life I talk about taking risks and digging deep to find your voice. I tell my students if they dig for gold they will find gold. I have just finished Kathryn Kay’s debut novel, The Gilder, and, boy, has she hit the mother lode. Her riveting story of friendship, love, betrayal and forgiveness kept me up way beyond my bedtime. Kathryn writes beautifully about difficult things, the things that tear people apart, and she does it with such honesty and tenderness that, clearly, her words come straight from the heart.”

Nancy Aronie, author of Writing From The Heart

Kay has created a fascinating tale, featuring a protagonist like so many wide-eyed expatriates before her, quickly seduced by Florence and the quintessential bohemian couple.... Kay twists her tale in refreshing ways, creating a story about deep female relationships, portrayed in all their complexity and nuance. 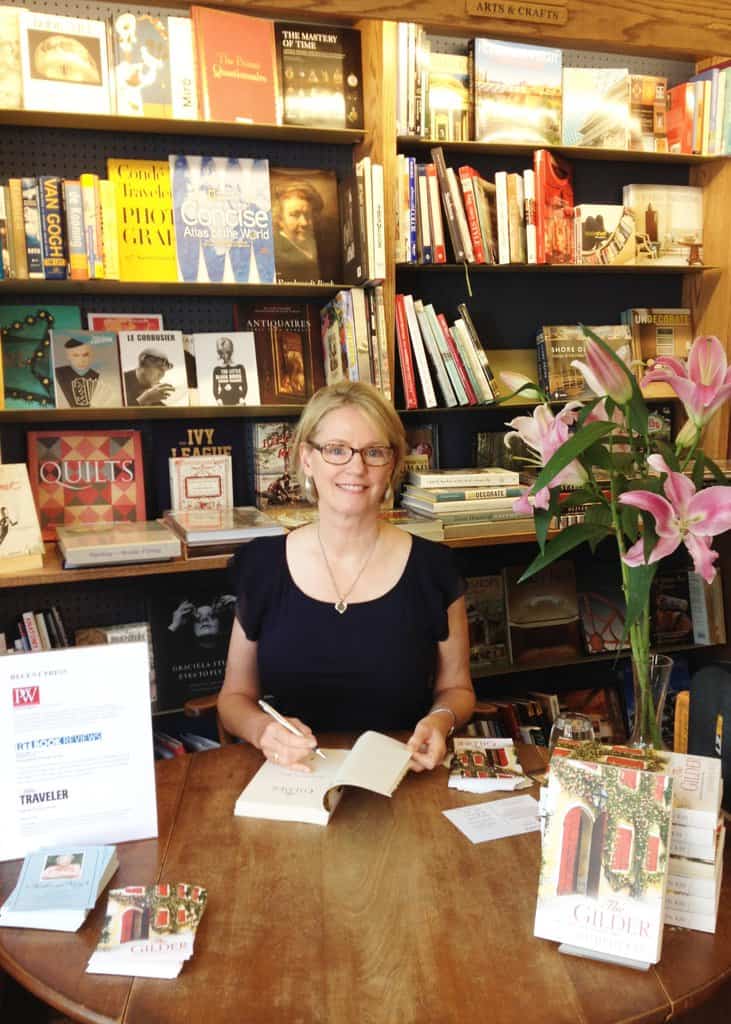 Q. I understand you once lived in Florence, and I’m wondering how much of this story comes from your own experience living there?

A. Yes, like Marina, I did live in Florence when I was in my early twenties, but I stayed for five years. Like her, I took a restoration course, and while gilding was a component of the course, I specialized in 15th-century inlay techniques. I had a friend in Florence who apprenticed with a master gilder, and I found it fascinating! I did live in via Luna, and my landlord was a poultry broker, but as far as I know, his son was not a transvestite...

I remember seeing the transvestites in the doorways, as I described them the night Sarah and Thomas take Marina for a walk, but I didn't know any personally. The list goes on and on. As in any fiction, there are bits and pieces of me, my experiences, the people I know mixed in with the fantasy. Just to set the record straight, I was not seduced by my best friend's husband, nor did I have his baby. In fact, it was something I worried about regularly while I was writing the book—what if readers, especially people who know me, imagine I did these terrible things.

Q. The relationships between the female characters in the novel are quite complex. Can you say something about that?

A. Yes, I think relationships between women can be pretty complex. I found I had to be careful not to go off in too many directions since I had the central relationship between Marina and Sarah and the lesbian relationship of Lydia and June, their relationship with Marina, and the question of her sexual orientation preference. Then there was Sarah's deep friendship with Marco/Marcella, the transvestite.
The original inspiration for Marina falling in love with Sarah came from a story that a good friend of mine (an older woman) once related to me. She told me that when her children were young, she'd had a good friend, someone she'd known for years, a woman with whom she'd raised her children, who one day confessed that she had "feelings" for my friend and wondered if there was any possibility of a more intimate relationship. My friend did not share these feelings and, while not offended, their friendship was never the same. I qualify that she was older only to point out that women having crushes on or falling in love with their female friends is not exclusive to current generations. The more I delved into this subject with women, the more I realized how common it is and how little it is spoken about, and so I wanted to bring it out into the light and see what would happen. It's a very particular type of relationship; it's not about becoming a lesbian; it's about straight women and what they do with these feelings. I created the lesbian relationship between Lydia and June to help Marina (and the reader) understand her sexual orientation. What can I say? It's a complex topic with amorphous boundaries.

Q. The other central relationship, of course, is between Marina and her daughter, Zoe. I understand that you were a single parent who raised a daughter. How much did that inform your characters?

A. Although my daughter did have a relationship with her father, whom she saw regularly, I raised her predominantly on my own and with very little financial support. She and I had (and still have) a lovely and very close relationship, but I did not hide behind it the way Marina did to avoid intimate relationships. Certainly, my feelings for my daughter inform Marina's love and feelings toward Zoe, and I can imagine the fear she feels when Zoe runs away and the terror at the thought that she may have lost her daughter's love. I know other women who are single parents, and I'm sure bits and pieces of them have crept into Marina's story.

Q. Many, if not most of the characters in your book, are artists or creative in some way; is that because it's set in Florence, or is there another reason?

A. Florence does lend itself to art—that goes without saying—but my life has always been filled with creative people. My father, who was a businessman, was very creative and could paint and draw and make just about anything you might imagine, and was a good storyteller, too. There are six children in my family, and every one of us is artistic in some way.
When I lived in Florence, almost everyone I knew was an artist of some sort, and I continue to be surrounded by creative people today.

Q. Your main character, Marina, struggles with forgiveness. Is this a concept you chose to explore for a reason?

A. Actually, I was well into writing the book before I realized that forgiveness had become a predominant theme. I'm curious about the concept of forgiveness. Intellectually, I understand the theory that if we do not forgive the injustice done to us, we are the one who suffers, not the person at whom we direct our silent rage. Still, it's a concept I struggle with despite having had some modest success in that arena. Once I realized the theme was there, I began to work with it on various levels with each character. It makes sense to me that Marina might find a way to forgive herself for her transgressions against Sarah but perhaps more difficult to forgive herself for hurting her daughter. I could imagine Zoe forgiving her mother but perhaps only as a means to survive. After all, she's only fifteen, and Marina is the only parent she has. Although I couldn't imagine how Sarah might find a way to forgive Marina, it's not beyond the realm of possibility, and I chose to leave that in the reader's hands.

Q. Was there a particular, specific inspiration for writing this book?

A. There were a few, including the topics we've already touched on, but I also wanted to explore what happens when a good person makes a bad mistake. When I started writing this book, I wanted to create a sympathetic character who did something so wrong it was unforgivable and, yet, was it? In Marina, I created a character who made a terrible mistake when she was very young and then chose, out of fear and naïveté, to cover it up. It quickly took on a life of its own, and before she knew it, she'd built a life on a foundation of lies. The thing is, she's not a bad person, but how does she survive a life like that, and what can she do when it begins to unravel? I'll be very interested to know if the readers will forgive her.

Q. Can you tell us about your writing practice?

A. Hmm, practice, of course, is the operative word here. You have to practice if you are going to turn out good work or any work at all. To be honest, my writing practice is sporadic. I have a busy family life and a lot of other things I like to do. I enjoy teaching my workshops and coaching other writers, and I'm a passionate gardener; I love to sail, I'm involved in community service, I travel, and my friends and extended family are spread around the world. But I'm not happy for long if I'm not writing. What works best for me is to write first thing in the morning, and the only place I produce work is in my office. I spent many years beating myself up when I wasn't writing until I realized that there is an ebb and flow and that returning to my practice is just a part of the process. And I'm always grateful when I do.

The Gilder on Amazon