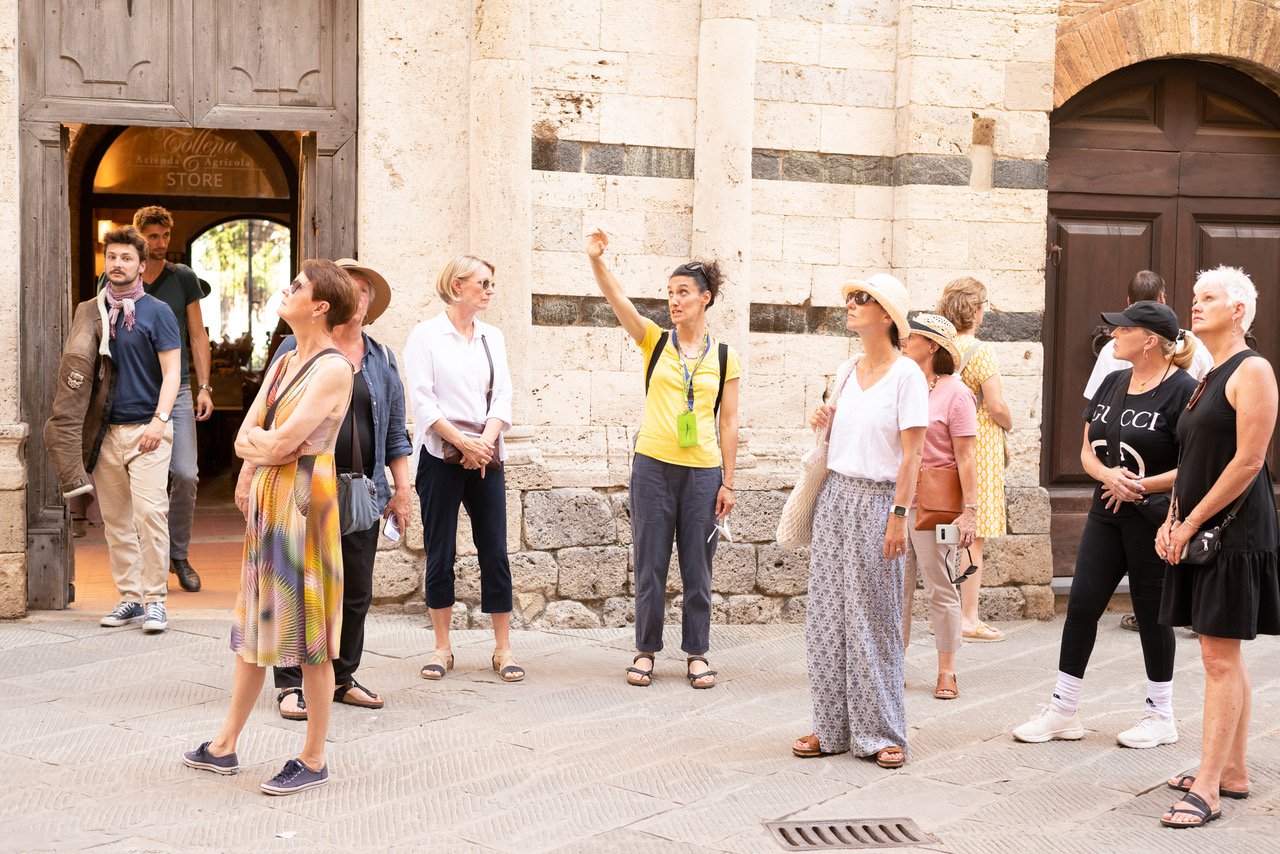 When I take a group of writers to Tuscany for a week-long writing retreat, I tend to take them on excursions to my favorite places. That doesn’t mean we don’t visit the must-see sights, like Siena and San Gimignano, because we do, but I often include lesser-known, out-of-the-way gems.

My retreats are held in a private villa about 45 minutes south of Florence, and since we write every morning, we only have the afternoons to explore, which means we don’t venture south of Siena. Therefore, the excursions listed in the blog are located in the part of Tuscany between Florence and Siena. 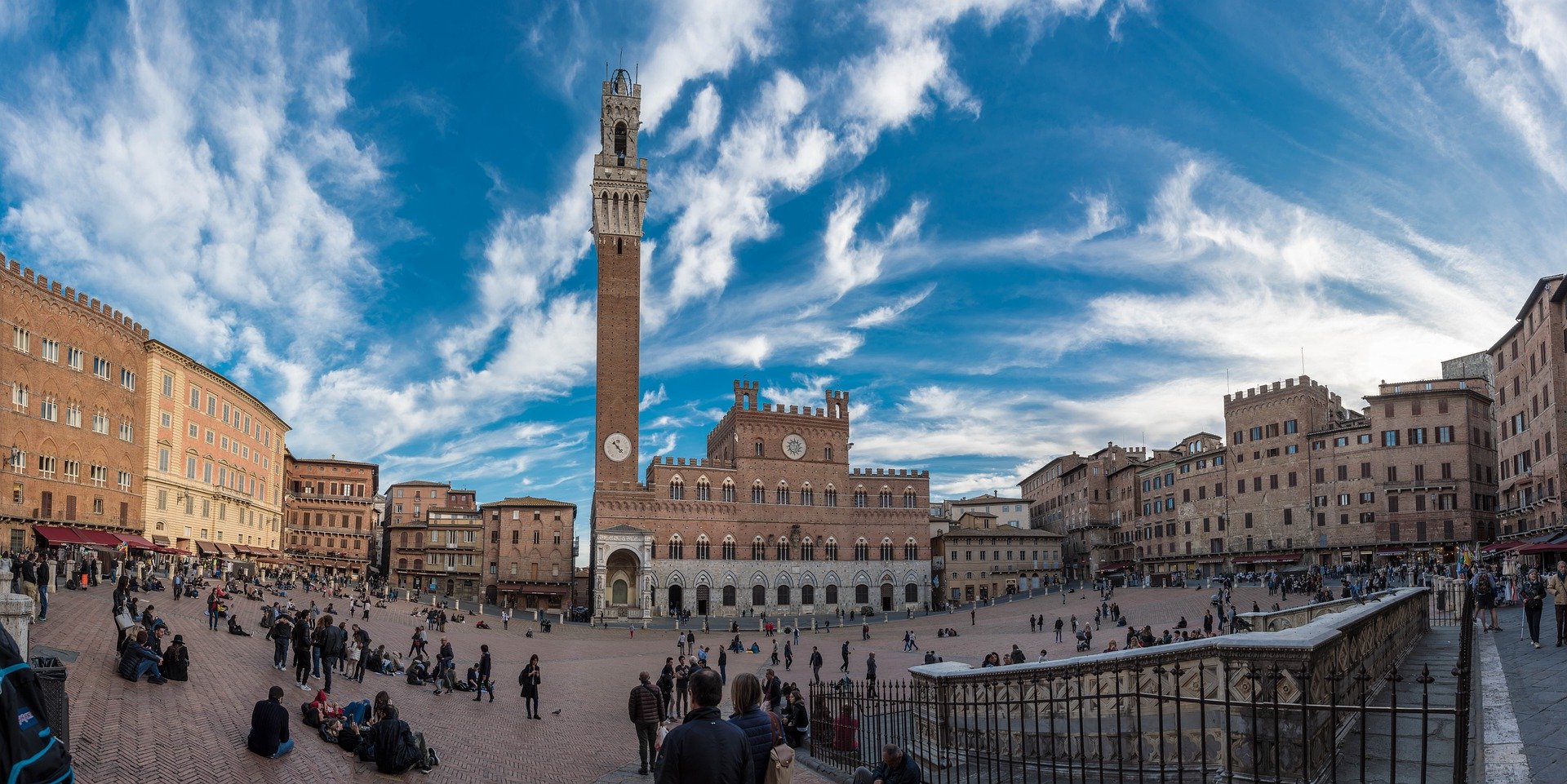 I always include a visit to Siena during my retreat weeks in Tuscany. It’s an impressive city with one of the region’s most beautiful historical centers—a UNESCO World Heritage Site—and the nearly 20,000 students attending the University of Siena add a certain vibrancy to the city.

Siena is known worldwide for the Palio di Siena horse race, held twice every summer in July and August. This medieval tradition takes place in Siena’s stunning main square, Piazza del Campo, where its gently tilted floor fans out into a stage set for this epic barebacked horse race. The piazza is overseen by the 100 meters high tower, Torre del Mangia, with its beautiful clock face.

Siena has a great deal to offer in art, architecture, and history, and you could easily spend a few days here. My half-day walking tour with local guide Elena Sardelli centers around the city’s history, its historic rivalry with Florence, and the Palio. We start in the Piazza del Campo, and as we wend our way through the narrow streets, it’s easy to imagine this thriving town as it was hundreds of years ago.

Our time in Siena wouldn’t be complete without a visit to the stunning Cathedral of Siena with its unusual dark green and white horizontal stripes. If you are lucky, the cathedral floor will be uncovered, and you will be able to see at least a few of the 56 marble panels depicting scenes from the Old Testament. 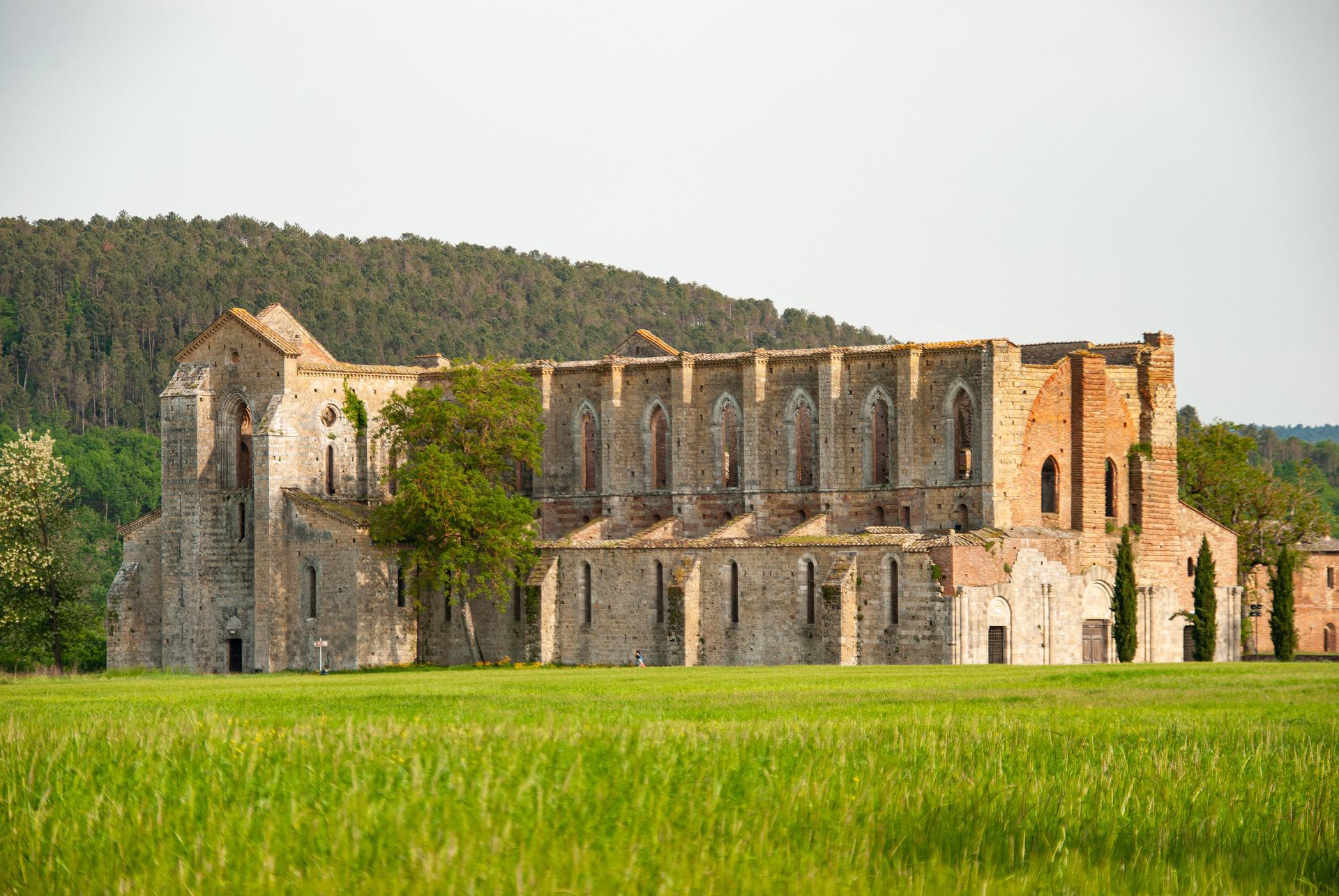 I know I said that we don’t venture south of Siena, but the atmospheric ruins of this 13th-century monastery are hard to resist, even though the location is slightly farther than most of my excursions, just south of Siena. As the story goes, San Galgano retired here around 1170 to live as a hermit and eschew violence.

The mystical quality of the site lends itself to the imagination, and I sometimes send my writers off with a writing assignment to complete in situ.

On the small hill above the Abbey, you’ll find the Hermitage of Monte Siepi. In this small chapel, you will see the stone in which San Galgano embedded his sword to symbolize his dedication to beginning a new life in faith and peace.

You’ll find a small cafe and gift shop next to the chapel with tables and chairs in the shade. 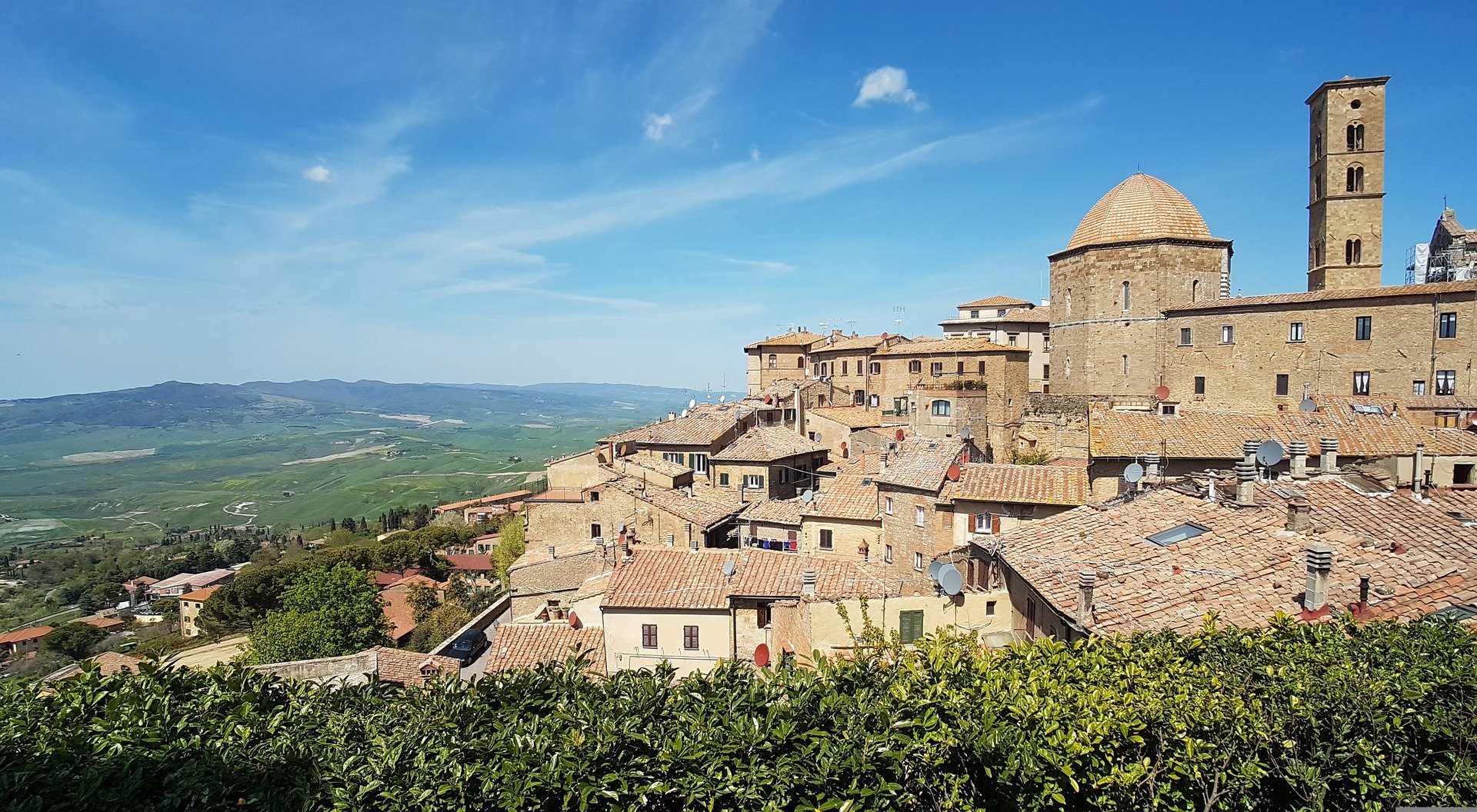 This beautifully preserved jewel is one of Tuscany’s hidden gems. The town is encircled by impressive walls and topped by a grand fortress and is just far enough off the beaten path to keep it feeling genuine.

We usually arrive during the quiet midafternoon hours, and it often feels like we have the town to ourselves. Volterra is famous for its artisanal alabaster production, and it’s well worth visiting a workshop to see a piece of alabaster become an elegant vase.

Its long Etruscan history makes for exciting sightseeing for a small town. The history museum is worth a visit, as is the Roman amphitheater.

Even if Volterra weren’t a treasure in itself, the drive through the stunning countryside is worth the trip. 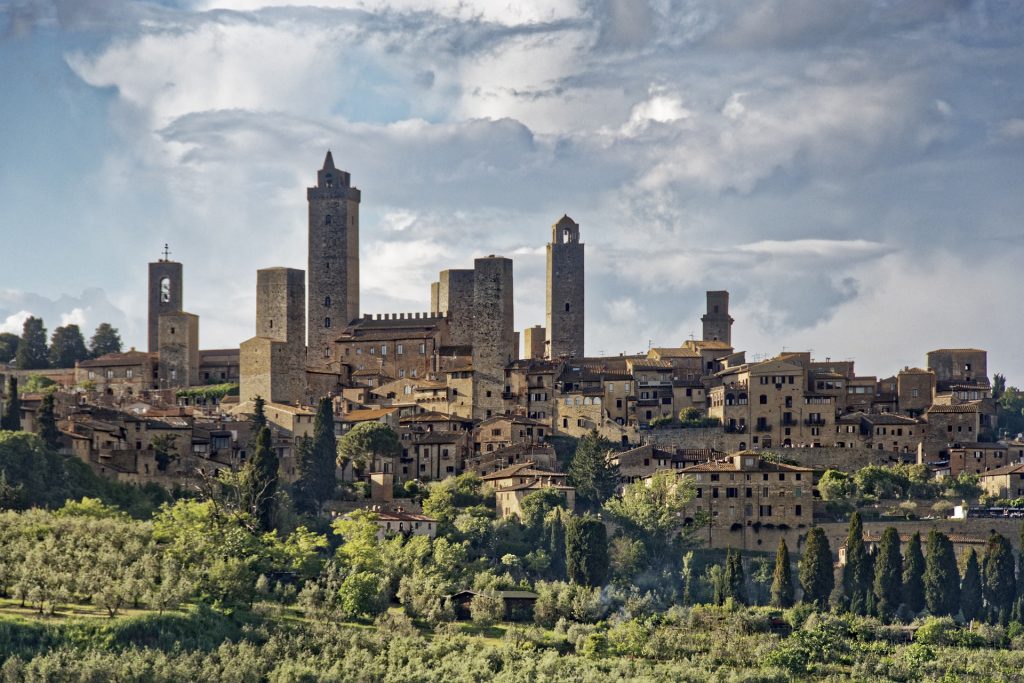 With its 14 surviving medieval towers, San Gimignano is visually striking and considered one of the must-see towns in Tuscany. Consequently, it’s a magnet for every tour bus on the way from Florence to Siena, but don’t let that dissuade you from visiting at least once.

In the center of town is Piazza della Cisterna, named for the cistern that stands in the center of this square. You’ll also find a gelato shop that claims “the best gelato in the world,” with a line of customs that snakes well into the piazza. Is it worth the wait? I think so, if only for the entertainment that its proprietor provides as he works his way down the line meeting a greeting his waiting customers.

Just off the central square, you’ll find one of the town’s most important sites, the Romanesque cathedral with its stunning frescos that recount stories of the New and Old Testaments painted by illustrious artists of the fourteenth-century Sienese school.

San Gimignano is a shopping haven (albeit commercialized) with fine crafts and beautiful shops. No visit is complete without climbing one of the towers.

If you arrive at the end of the day when the tour buses have departed, you can enjoy a lovely dinner, wander the side streets and capture the true essence of this stunning town. 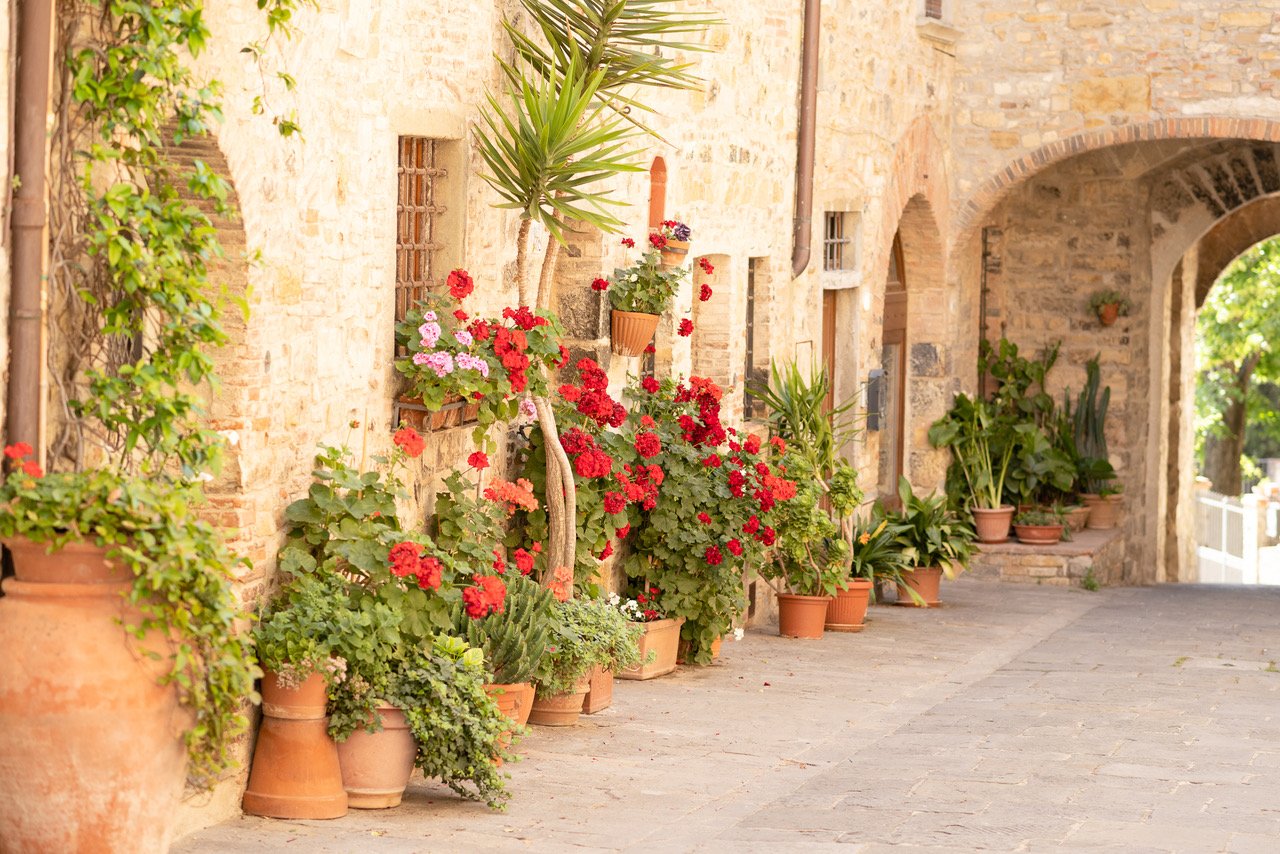 Castellina in Chianti is one of the most important and charming hill towns in the Chianti region of Tuscany. I sought it out after a friend raved about his visit there with a childhood friend, an ex-pat, now married to an Italian —and it didn’t disappoint.

This picture-perfect town, set amid the wine-famous Chianti hills, has just under 3,000 inhabitants. The 14th-century fortress offers spectacular views of the town and surrounding countryside. Make sure you follow the Via delle Volte medieval arched passageway that runs along the edge of the town. Just outside of town are the pre-Roman Etruscan burial tombs of Monte Calvario and the Necropolis of Poggino.

Castellina is basically a one-street town, but the shopping is high-quality, and the restaurants offer a wide range of choices. 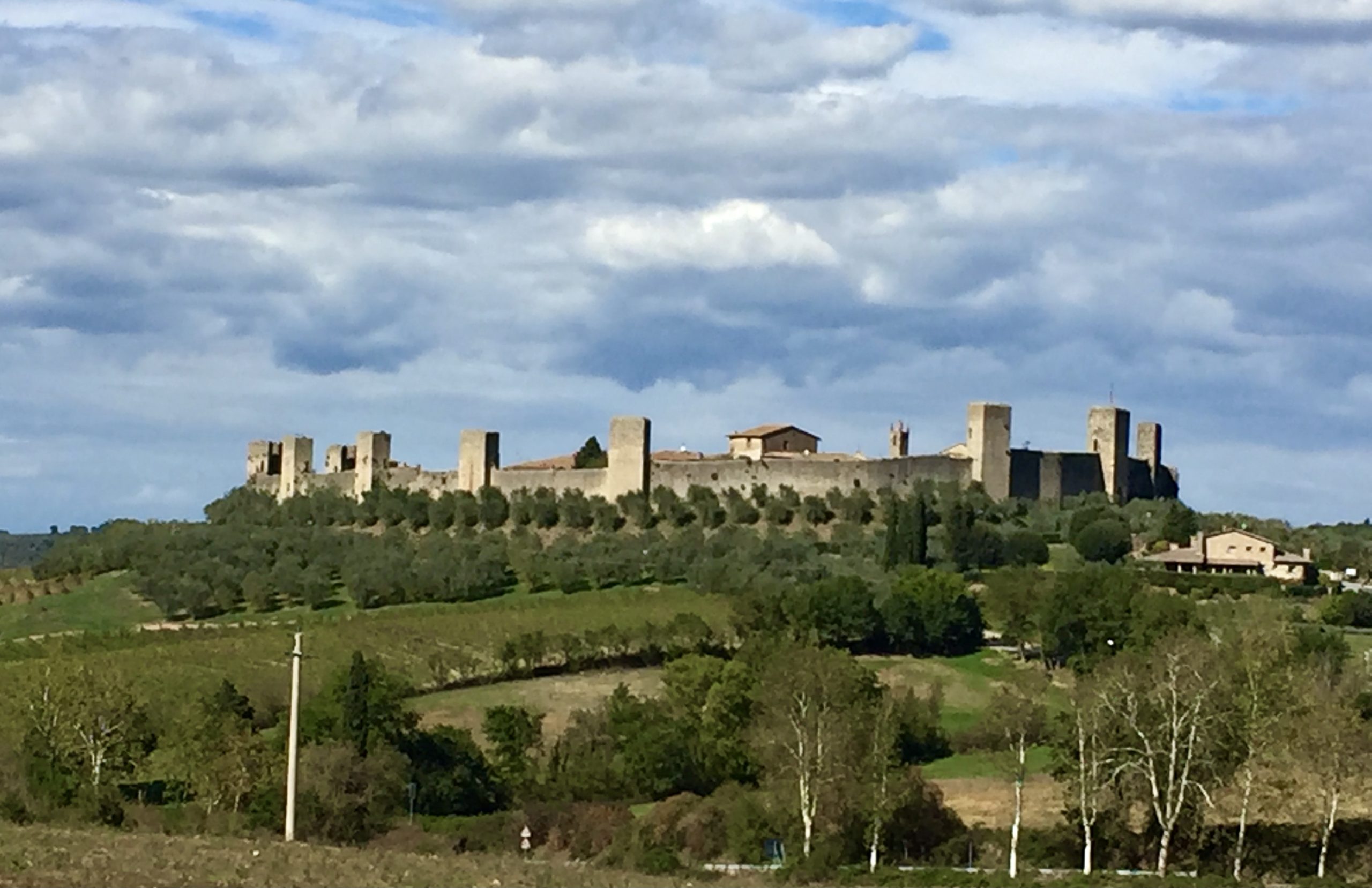 This tiny medieval walled village, located on a natural hillock, is where I sneak off to at the end of my week of teaching if I need a little quiet time and a gelato. There’s something about its perfectly preserved walls and miniature scale that I can’t get enough of.

An hour and a half is plenty of time to climb to the top of its ramparts, make a loop through the charming side streets, and enjoy a coffee in the central (only) piazza. I always peek into the lovely church of Santa Maria Assunta to see if anything is going on, which it usually isn’t. Although, one afternoon, I was lucky enough to witness a small parade in front of the church, complete with the Madonna atop a gilded platform on the shoulders of costumed parishioners.

You will pass Moteriggioni on the road to Siena, so make sure and stop. If you are hiking, the pilgrim’s route, Via Francigena, runs along the road nearby.

Enjoy the tour, and let me know how it goes.

How To Rediscover Your Beginner’s Mind 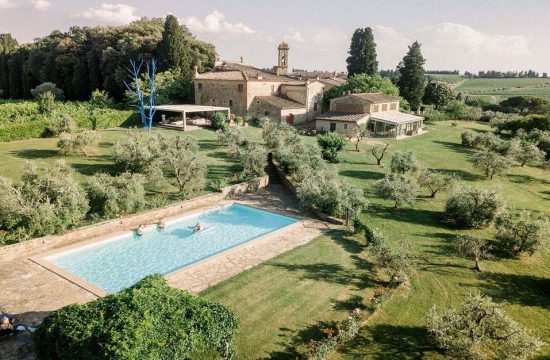 6 Reasons Why You Should Attend A Writing Retreat 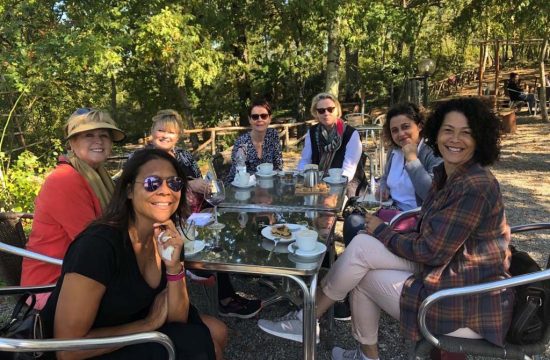 Getting Myself to Italy 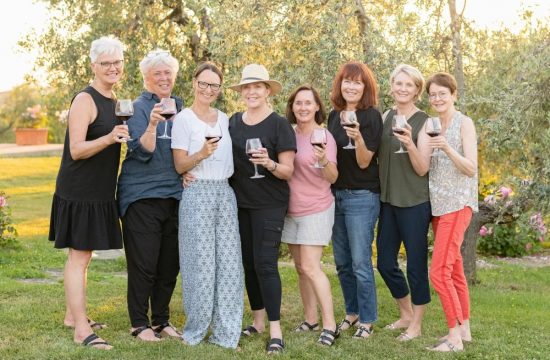 A Day at A Women’s Writing Retreat in Tuscany